My September 2017 Income Report: This Girl is on Fire Skip to content

Let’s jump right in with this September 2017 income report! I’m super excited to share with you guys what’s been going on with me lately. 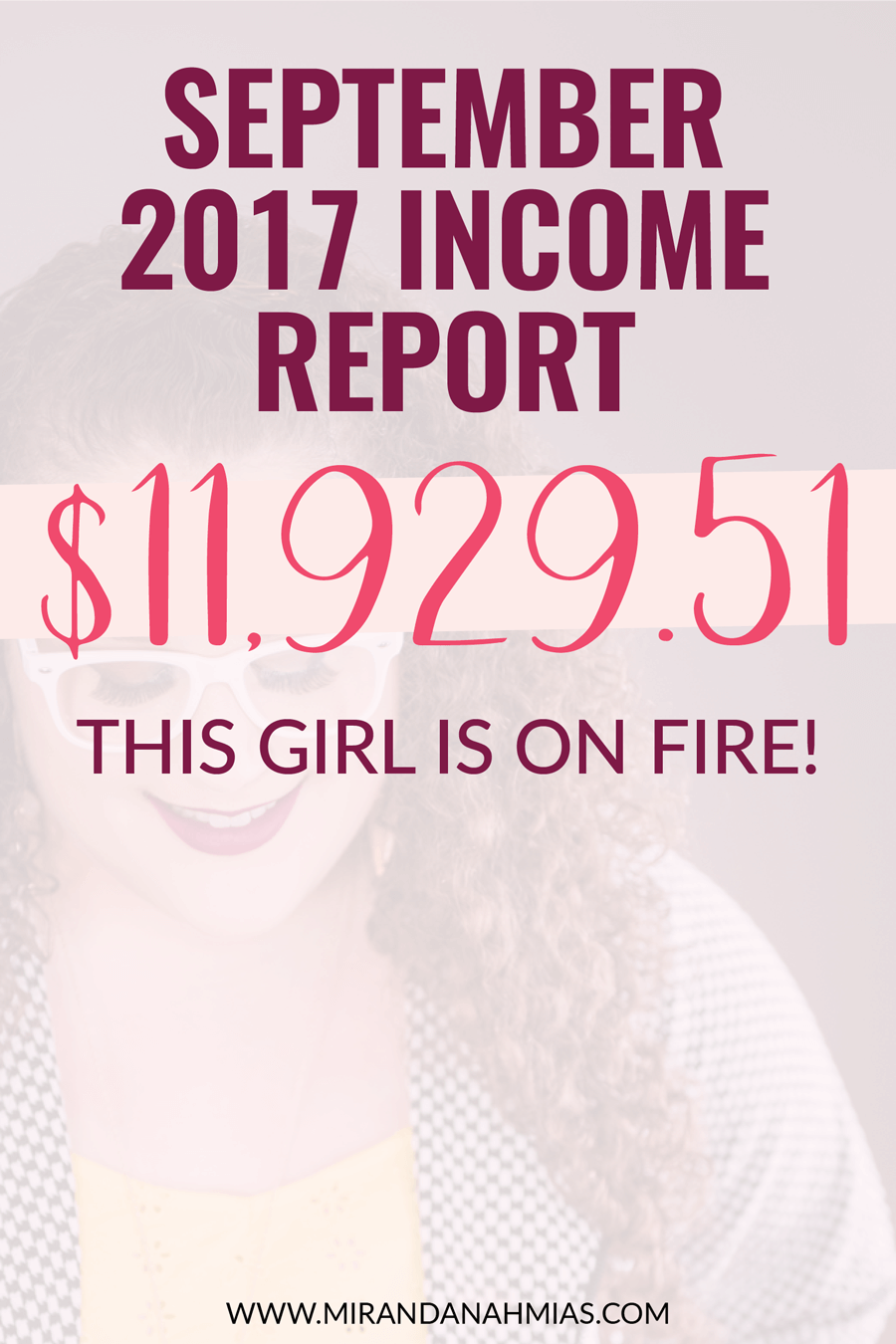 After last month’s amazingness, I really had no idea what to expect in September. Are all of my months going to be $10k months from now on? Or was August really just a brief glimpse of the future, and I would immediately go back down to my normal $5-7k months?

I always knew that consistent $10k months were going to happen for me. If you’ve been keeping up with all my income reports, you know that I’ve been working very hard to set myself up for this. I just didn’t think that I would “get there” until the beginning of 2018.

Once I realized that achieving $10k was possible for me, I spent September trying to work on duplicating that success. But my main focus was actually figuring out how to have a $10k month without my team going crazy. August was amazing in terms of income, but we were completely running ourselves ragged. I knew that even if that kind of a month was repeatable, we were not in a good place to actually repeat it.

So, throughout September, I spent a lot of time putting even more systems in place in my business. My project manager and I worked to identify weak points, and then we figured out how to put extra support in those areas.

I know that is kind of vague, so let me give you one example of what this looks like:

One of the key changes we made in September is seemingly insignificant and arbitrary, but has actually made a huge difference. We switched the day of the week that we update clients.

Basically, I always send my clients weekly updates on how much time they have left on their package. We originally started doing this (over a year ago) on Mondays, and it’s never been a problem. But recently we realized that Mondays are consistently also our busiest day of the week.

Besides the fact that it takes us a few hours to complete the task of sending out all the update emails, Monday is almost always a crazy day in general. All of our clients, and some of the team members, are getting back in touch after taking the weekend off, so there is usually a big influx of email correspondence and tasks to handle at the start of the week.

Having both a huge weekly task (the update emails) plus the busiest day of the week on the same day suddenly seemed ridiculous. Why were we doing this to ourselves?? It had just never occurred to me that we could change the way we’ve always done this thing; it was so ingrained in my weekly workflow.

But, hey, I’m in charge — I can do whatever I want! So, we ended up switching the update emails to a different day so that we weren’t burning ourselves out on Mondays and constantly rushing at the last minute to finish sending all of these emails out.

My Goals For September 2017: Success or Failure?

**Annual expenses not included (such as Tailwind* and hosting costs*). 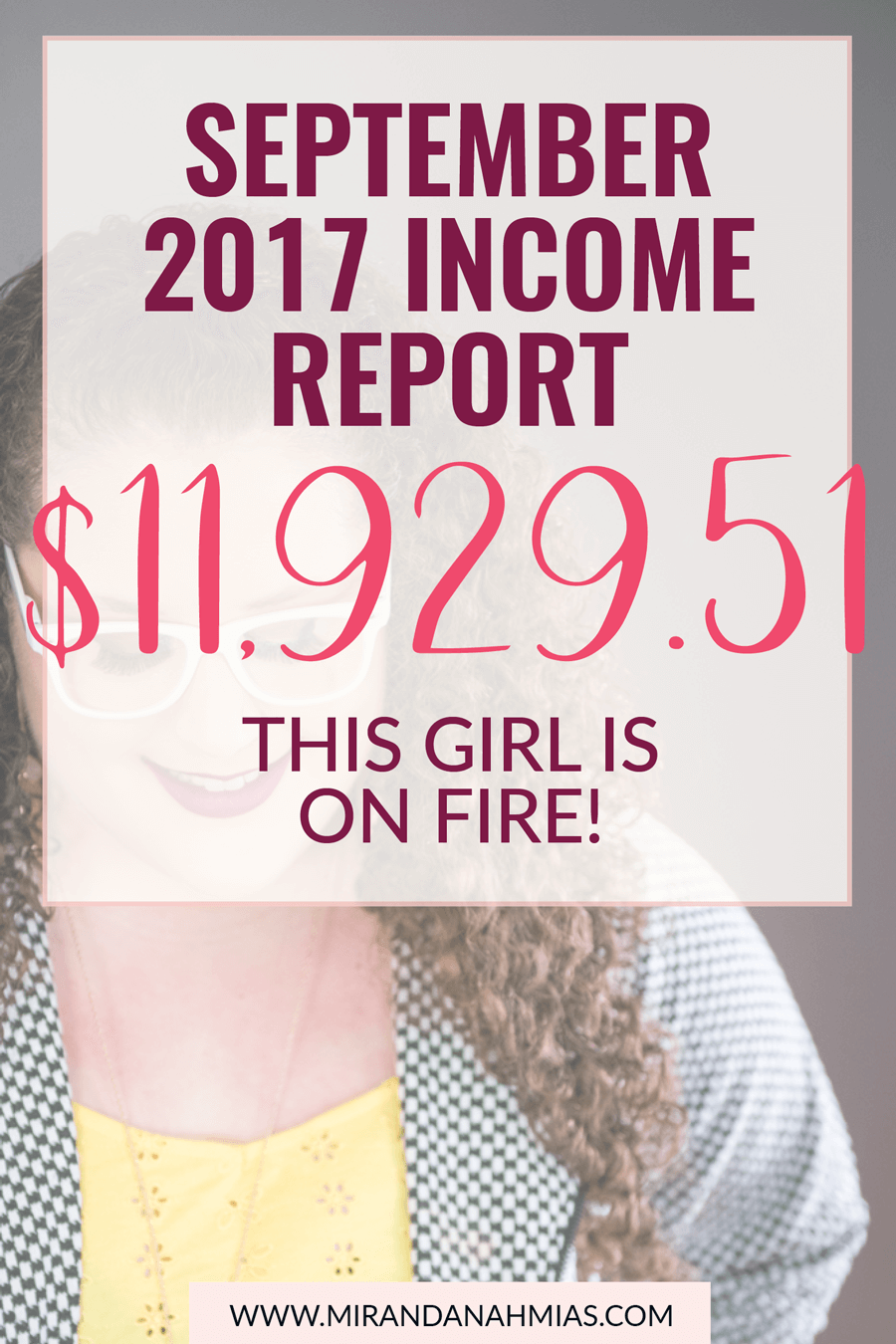 This is craziness! Out of all the potential outcomes for September, having a better month than August honestly never even crossed my mind.

I’m baffled and impressed that I managed to maintain a killer income while also reducing the overall stress on the team. If you had asked me to guess, I would’ve said we had made around $8,000, because proportionally that is how much less stressed I was in September than I was in August. I’m hoping that my team is also feeling a bit of relief, because I could live with having a few more months that are like this!

The only downside is that, since I really thought August’s big leap in income was purely just a “glimpse of the future,” I was not prepared to achieve another $10k month in September. It’s awesome…but at the same time, now that it’s happened twice, I’ve proven that it’s not any sort of “fluke” and now feel super pressured to keep having more $10k months.

If I’ve shown that it can be done (now, twice in a row!), it’s like I don’t have an excuse for making anything less than that anymore. Plus, when I look back on when I reached my last income goal, I did continue to achieve that same success. After reaching my first $5k month in December of last year, I never made less than $5k/month after that. So, yeah…just more pressure to not ever make less than $10k/month again! Ahhhh.

While it is good to have some type of accountability for myself (my mentor Julie is constantly accusing me of “playing small”), I’m scared that I won’t do as well in October, or the future months to come. Then, I will have disappointed myself and my team, and my audience won’t respect me as much.

I know deep down that this probably isn’t true…but I still think there’s a small grain of truth there. I no longer have an “out” for not consistently making $10k per month. No more excuses to fall back on. And I’ve been able to achieve this type of result in the past.

So, yeah, I’m struggling with that right now.

I’m excited and super happy, but there’s also a little bit of fear and anxiety, too.

Do you have any advice for me? How do you deal with the pressure to perform at a certain level? Leave a comment below!