Let’s jump right in with this July 2017 income report! I’m super excited to share with you guys what’s been going on with me lately.

My goal with these posts is to give you guys a super realistic look into what type of income and expenses you can expect from being a “girl next door” type of online entrepreneur who isn’t making 5-6 figures each month (yet!). 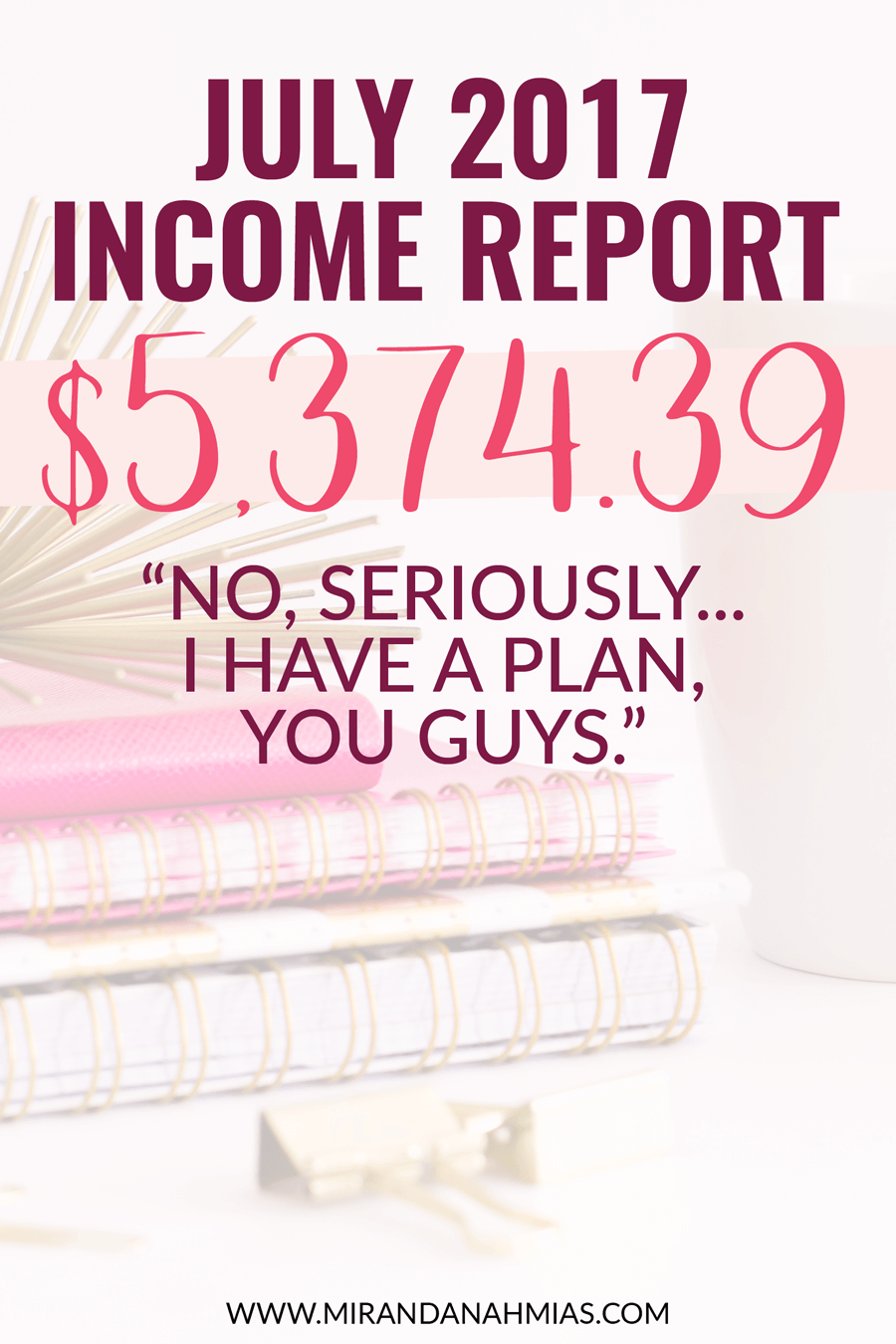 Honestly, July went by in kind of a whirlwind. Suddenly it’s the middle of August already and I’m not quite sure what the heck happened. June was an amazing month, but then July started out soooo slowly.

During the beginning of the month, I actually had 9 no-show discovery calls in a row! That was really frustrating, and I even wrote a newsletter about it, so the month definitely did not start off very good.

At the very end of the month, things finally started to pick up again, and August started off with a huge bang. I’m expecting a pretty good month next month! But as a result, July ended up just being kind of average.

**Annual expenses not included (such as Tailwind* and hosting costs). 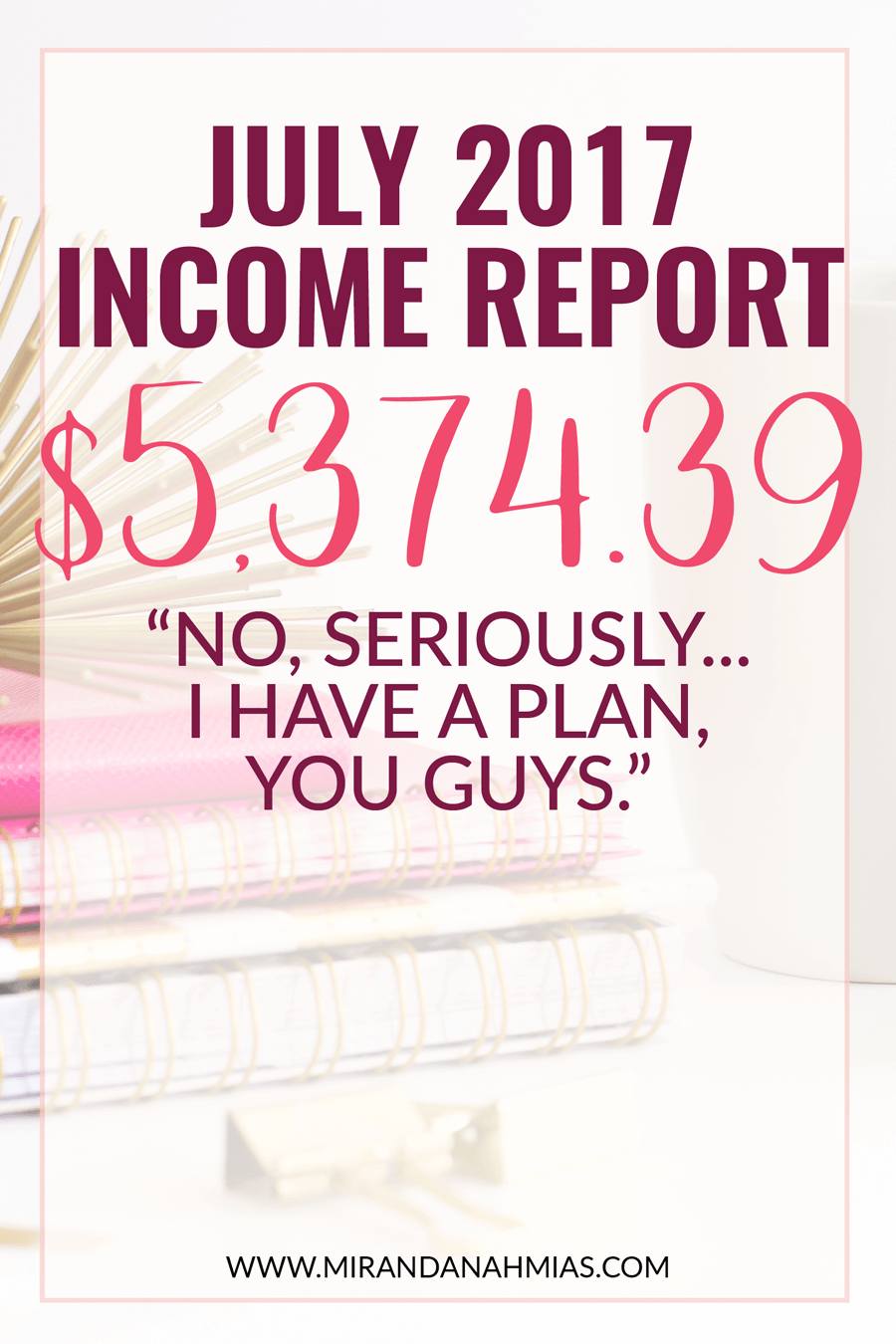 Check out that cool new chart! I decided to start including these as a reference to my business’ growth over the past year. As you can see, while income was on a steady climb in 2016, I did not maintain that same momentum through the first half of 2017.

But, while overall income has been staying at about the same $5-6k mark since last December (except for two really good months), this is because we have been strategically focusing on increasing our profit margin. And, as you can see in the chart, June and July were awesome months for profit margin! (Profit margin is the percentage of difference between your profit and income). The last time it was this good was almost a year ago, back in October of 2016!

So now our profit margin is finally under control. This is something I have purposefully been putting a lot of effort into this year, specifically by going through the Scale Up mastermind from Create Your Laptop Life, as well as hiring a project manager.

Basically, what we’ve been doing through 2017 is priming the business for growth. Last year in 2016, it was my first year of business and we exploded from making an average of $1,000 a month to an average of $5,000. That was craziness, but pretty typical for a successful new business. Because it got so out of control, our profit margin was shot! I had no idea how to grow the business with such an increase in income. I was working 20-hour days, spending way too much money, and had only 4 people on my team. By the end of 2016, I was burnt out and the business was virtually running off the rails.

Now, almost a year later and with tons of work behind-the-scenes, I have 11 people on my team and have actually lowered subcontracting expenses overall. I’ve also lowered general expenses, reduced my personal work load to a relatively normal scale, and have been able to focus a lot more on my own business than I ever would’ve thought possible back in 2016.

With everything sitting pretty right now, we’re primed for the business to explode again in 2018. I know it’s only August, but I’m extremely excited for what I’ve been building this past year. 2018 is totally going to be my year.

I’m envisioning that the rest of the year will be spent on the last few things we have left in the “priming” stage. Most notable of which is that we’re in the middle of switching over almost completely from hourly to package pricing, with a larger focus on my team’s marketing skills vs. traditional virtual assistant administrative work.

Anyway, I hope you guys enjoy seeing these reports! It’s kind of cool to sit back and get a little bit of retrospect at the end of every month. Here’s hoping that your business is doing as awesome as I think mine is!