My August 2017 Income Report: A Glimpse of the Future Skip to content

Let’s jump right in with this August 2017 income report! I’m super excited to share with you guys what’s been going on with me lately. 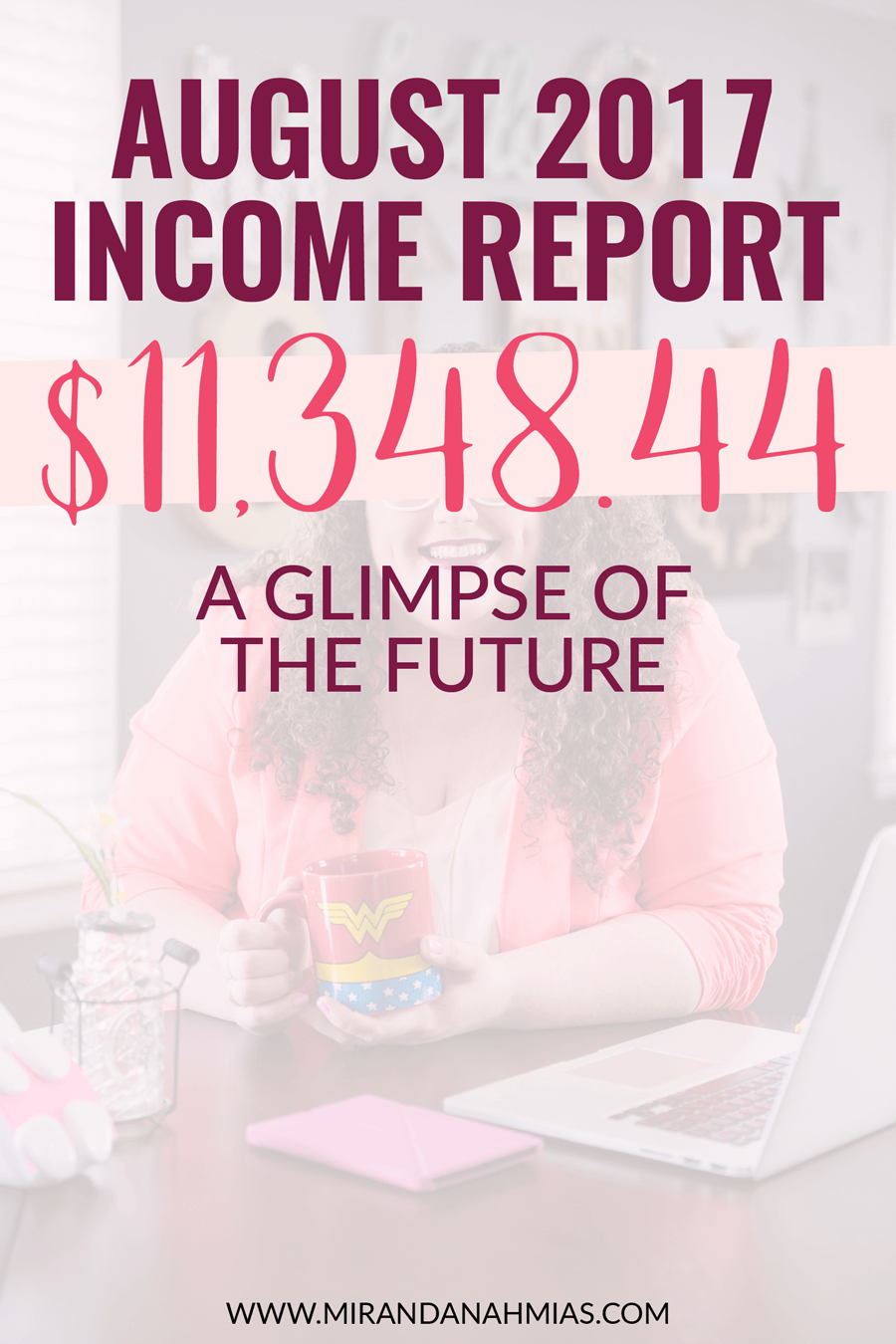 Most of the time, when I’m writing my income report, the result of the previous month’s work is pretty much a mystery. Because I’m busy managing my team and doing client work, I let my bookkeeper take care of all the financial aspects of the business. So I used to have a good idea throughout the month of where the business was at. But since I hired her, I simply get a breakdown at the end of every month, and that’s when I say “yay!” or “ugh.”

August was a bit different. It was by far our busiest month since last February, and I could tell that we were probably going to have an awesome month, income-wise. I was landing client after client, and we were up to our ears in Asana. At times, it got pretty ridiculous. My project manager was probably working full-time hours for me the past few weeks, and I was staying up until all hours of the night trying to complete tasks. We definitely took on a bit too much, but things just sort of exploded and I didn’t know what to do!

Once we realized that we couldn’t handle this huge influx of new work, we worked even more diligently to put new systems in place for the future. I don’t want to overload my team like that again! The whole point I made in my income report last month was that I was purposefully trying to grow slowly and steadily so that I wouldn’t overwhelm myself and my team. August was a bit of a “whoops” month, in terms of how much work we had. It was way too much for us, and nobody was comfortable with it.

But there are times when that just kind of happens in business. In the end, it was obviously a good thing because we made a huge amount of money. Honestly, though, I don’t want to have a month like that again! I’ll definitely take the money, but this is why I’m working so hard to solidify my systems so that, in the future, we can take on this many clients and still maintain a seamless flow that does not involve any of us losing our minds.

And even though it was kind of horrible, I’m still glad it happened. After last month, I was a little bit discouraged. It was definitely more of an “ugh” month. But overall, I was still really confident in my plan for my business. I knew that if I saw everything through, eventually things would start to look up.

And August brought me legitimate proof of that! Just a few short weeks later, I had my most profitable month ever! Now, I don’t just have to have blind faith in my plan…I KNOW that it’s going to work. I just need to keep pushing and keep pushing, and eventually we will make it to $15k per month, $20k per month, and maybe even eventually $50k per month. (A girl can dream, right?)

My Goals For August 2017: Success or Failure?

**Annual expenses not included (such as Tailwind* and hosting costs). 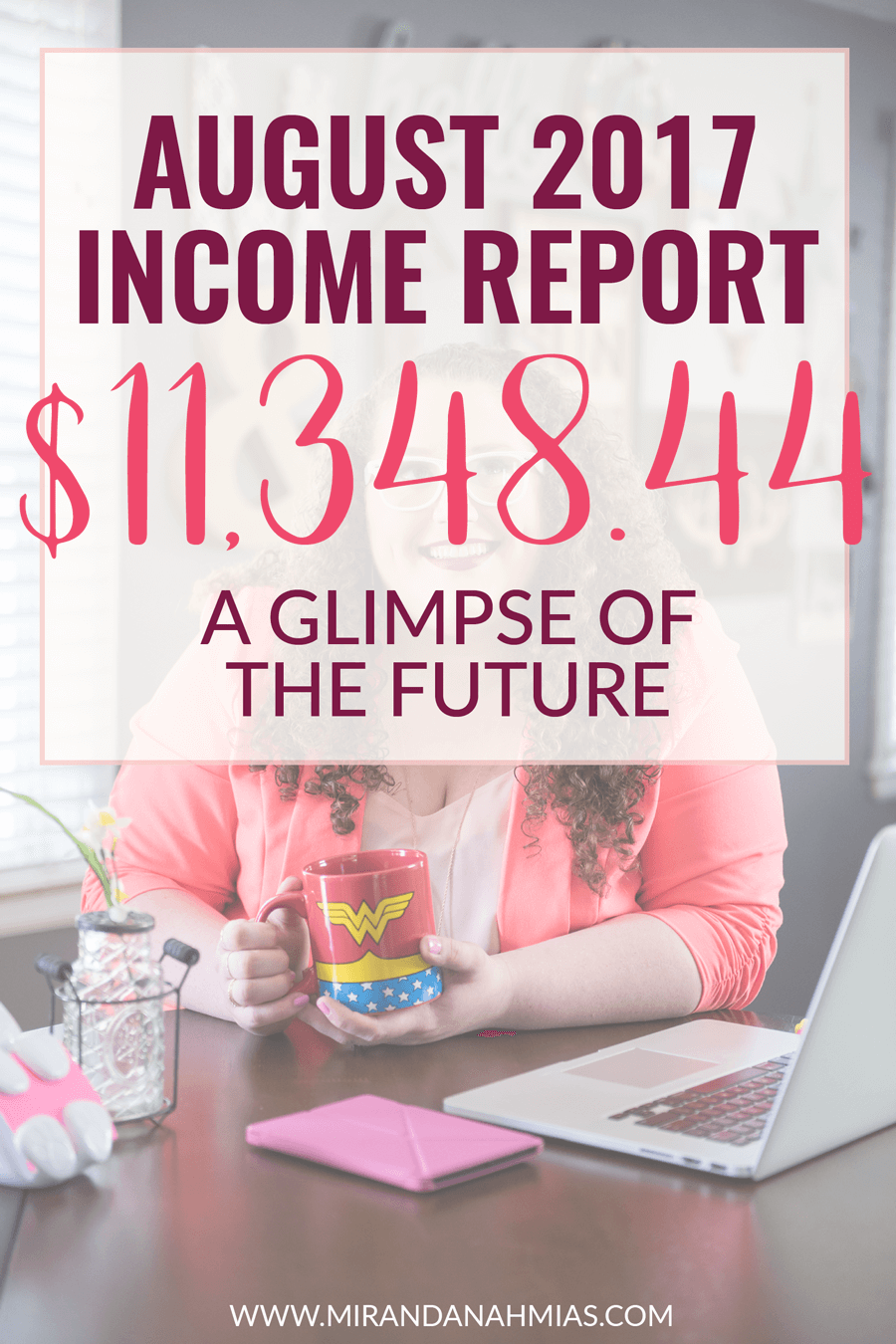 I just want to say a heartfelt thank you to everyone who has supported me over the past two years of business. I have made a ton of friends and connections during this time, and I truly appreciate all of them so many. Every single person who has ever read a blog post, left a comment, interacted with me on social media, bought a product, referred a customer, or became a client…you all mean so much to me.

Hitting my goal of making over $10,000 in one month just feels so…surreal. I can’t describe the feeling, but it’s amazing. I just feel so grateful and extremely lucky to be in this situation.

Two years ago, I was a disabled college graduate who felt completely future-less. I had no hopes or ambitions, and all I ever dreamed of was getting married. Nothing else besides my relationship with Brent brought me joy. I felt alone, lost, and completely without dreams. What I had could barely have been called a life. I was just existing.

Finding the world of online business allowed me to find myself again. Except this time, I was a whole new person. A better person, and someone who deserved happiness and good fortune.

Since starting my business, my health and overall outlook on life has improved dramatically. I’m now married to the love of my life, and am so happy with our little family together. I’m fulfilled and satisfied in all areas of life, and I’m joyful every single day.

I hope you feel the same. If you don’t, I hope you are on your journey to finding that.